skip to main | skip to sidebar

The highlight of the project was Superman's cousin Kata-Zor's giant battle mech. The film climaxed with an epic battle between Superman and this Kryptonian battle pod. Despite the numerous logic bombs in the conception of the sequence, it still would have been a cool scene to watch!

These were some early concepts that were rightfully rejected as too "chicken-like," but I enjoyed envisioning some alternative weapon configurations. 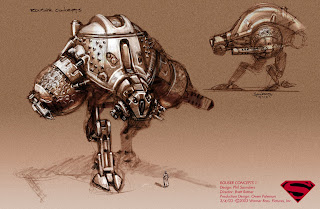 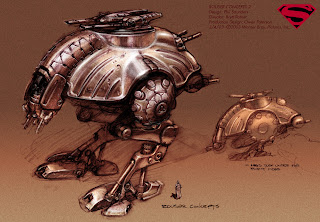 This was the final design. The Rouser needed to start out as a flying battle pod before the legs folded down for walking mode. 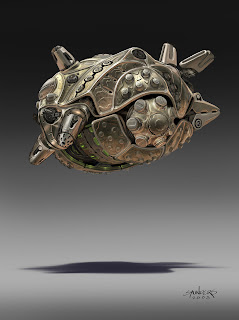 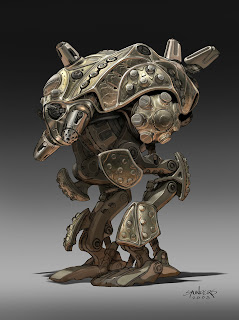 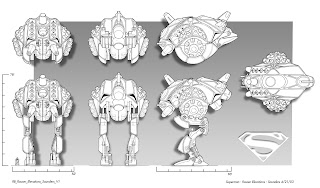 Two versions of the interior. Production designer Owen Patterson wanted to represent Kryptonian technology as a backlit glowing green energy. The Mech would be controlled by a motion control scanner that would translate the pilots motions into movement. 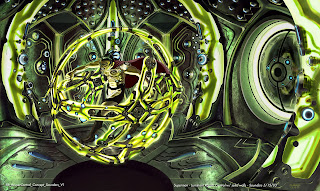 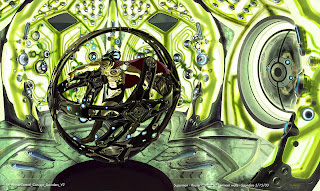 When it was considered that the vfx and wirework required for the zero-G gyroscope would be too expensive for every shot, I had to come up with an alternative design that could be achieved practically.

I've posted this before, but here is the climactic battle. Once again, I wish I could have used a more dramatic angle, but the production designer wanted a clear sense of scale between Superman and the Rouser.

The battle ends when Superman flies circumnavigates the globe before the Rouser can turn around, building up enough momentum to fly through the battle pod.

Boy did I get a lot of mileage out of that one sketch, huh? Anyway, an interesting project that never saw the light of day.

Posted by Phil Saunders at 1:17 PM

Hey Phil - Thanks again for sharing this with us. I blog about superhero movies and I want to give my readers a heads up about your Superman work. May I have permission to re-post a few of your images on my blog?

Sorry, I don't actually check my blog that often so this is a bit late but... sure!

There is a chance you are eligible for a new government solar program.
Find out if you're qualified now!